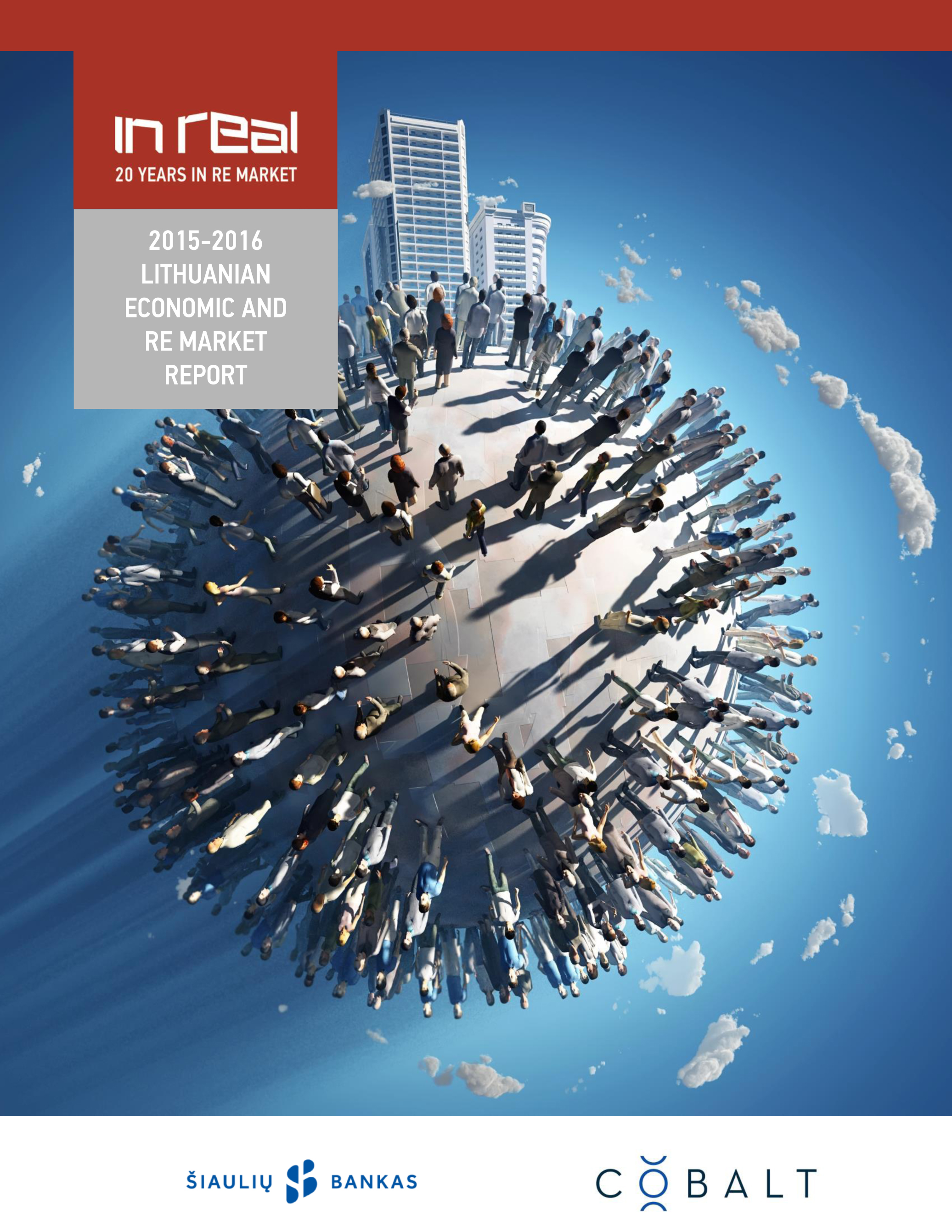 Economy
Last year, Lithuania's economy was growing slower than in the past few years. Like throughout the year, in the last quarter of 2015 an unfavourable external environment was the main factor leading to slower economic development. However, this factor has not so far affected households' expectations and consumption which is the main driver for economic growth.
Most countries in the world did not see an expected breakthrough of economic development in 2015. International organizations have repeatedly adjusted the forecasts for global economic growth, postponing the recovery momentum until next year. The uncertainty in respect of the prospects of the global economic growth remains high, however, a slightly faster economic growth in Lithuania can be predicted in 2016 - it should be up to 2.5 percent.
Exports to the European Union, the main Lithuanian foreign trade market, are consistently growing. Adaptability in redirecting exports to new markets will have an even greater positive impact on the overall annual economic growth in 2016.
Households' consumption is the brightest light in Lithuanian economy. Consumption is growing quite significantly, regardless of the persisting uncertainty in respect of the country's economic prospects. It is forecasted that the unemployment rate will continue to decline and will reach the natural rate of unemployment. This year, wages are expected to increase approximately by 5 percent, thus, given low inflation, consumer purchasing power will continue to grow.
The average annual inflation rate remains negative hence prices are lower than they were a year ago. A fall in prices was mostly determined by a decline in the prices of energy raw materials, especially oil prices. Annual inflation is likely to become positive this year, however, raw material prices having hit new lows at the beginning of the year, trends in the price fluctuations should continue to be favourable to consumers.
New measures for the ECB monetary policy stimulus are likely to be announced in March this year. They should ensure the Eurozone's continuing economic recovery.
Real Estate market
In 2015, the real estate (hereinafter – RE) market was less active than in 2014. In 2015, there were 27,652 apartment purchase-sale transactions concluded, i.e. 9.8 percent less than in 2014; 11,908 private house purchase-sales transactions, i.e. by 7 percent less than in 2014; and 28,464 land-plot purchase-sale transactions, i.e. by 1.8 percent less than in 2014. Such outcome was resulted mostly by particularly sluggish start of the year 2015. Nevertheless, the RE purchase-sale transactions has grown significantly in the second half-year, and the market turned back to its normal pace, thus the situation should be better in 2016. More active late 2015 has led to better expectations in the secondary market, where an increase in apartment prices by 4-8 percent was observed in Vilnius, Kaunas, Klaipėda and Šiauliai. The prices of apartments in Panevėžys and Alytus grew less – by 2-3 percent, meanwhile the prices in smaller towns have remained stable. The prices of private houses have not changed in Lithuania in a year.
The number of transactions in the market of new-construction apartments was growing in Vilnius only – there were about 3,680 apartments sold in a year, i.e. about 20 percent more than in 2014. In a year, there were about 290 new apartments sold in Kaunas, i.e. by approx. 15 percent less than in 2014; about 210 new apartments sold in Klaipėda, i.e. by approx. 27 percent less than in 2014; about 240 apartments sold in Palanga, i.e. by approx. 40 percent less than in 2014; and about 16 apartments sold in Neringa, i.e. by a half less than in 2014.

We forecast that, in 2016, the RE developers will be less active in the capital city, i.e. they should supply the market with about 3,000 new apartments, meanwhile the demand will depend on external factors – the influence of Russian, Chinese and other problematic economies on our economy. Vilnius is distinguished by a very strong internal demand, therefore, it is possible that the market will remain active in 2016, what allows expecting the increase in RE prices by 3-4 percent at an average. On the other hand, according to the analysts of Inreal, in 2015, the demand in other cities of Lithuania was much weaker even with lower level of prices. However, it is observed that residents become more interested in investing in RE, therefore, in 2016, we should expect the activity to grow in other largest cities as well. It is difficult to distinguish reasons for activity of housing market to grow in smaller towns, thus the level of prices will likely remain stable there.

In 2015, retail trade volumes increased by 2.1 percent in comparison with 2014. Positive situation in labour market, i.e. decreasing unemployment and growing wages, allows us assuming that a moderate growth of retail trade should be further observed. Therefore the environment will be more favourable for investments in this segment. In 2015, there were four new shopping centres opened in Lithuania, three of which supplied Vilnius market with 27,600 sq.m GLA; and one in Panevėžys, which added 1,600 sq.m GLA. In 2016, it is expected to open four newly built or expanded shopping centres: three in Vilnius (48,000 sq.m) and one in Kaunas (30,000 sq.m).

Although the vacancy rates in shopping centres have increased insignificantly, but they remain particularly low, i.e. not exceeding 3 percent, what allows the managers of shopping centres to hold better positions in negotiations and increase lease prices moderately.

In 2015, increasing vacancies were observed in warehousing lease segment in the largest cities of the country. Vilnius has maintained a stable level of vacant premises only, despite the fact that two new logistics centres, which added 14,000 sq.m GLA, were opened in Vilnius in 2015. Vacancy rates in Kaunas and Klaipėda have become worse. There were about 6,330 sq.m of modern warehousing premises vacated in the logistics centre Kaunas Terminal, which is located in the free economic area. Several modern logistics centres offered vacant premises in Klaipėda market. Taking into account the fact that 2 modern logistics centres were being built in Klaipėda and they will supply the market with up to 29,000 sq.m GLA, i.e. up to 24 percent of the entire supply of logistics centres in Klaipėda, it can be expected that the vacancy rate will also be higher in 2016 than in 2015.This, in turn, will increase the pressure on warehouse lessees and impede the expansion of logistics centres.
Regardless of decrease in tourist flows from Russia, in 2015, the occupancy rates of Lithuanian airports and hotels have continued to grow in the hotel segment, presenting favourable conditions for the segment to grow in Lithuania. The environment was favourable for the expansion of hotel segment in Lithuania, and further development is expected for 2016. In 2015, there were 6 hotels built or reconstructed in Lithuania, supplying the market with 442 rooms. In early 2016, “MG Valda” plans to open a new 34-room hotel in Pilies street in Vilnius. The hotel chain “Hilton”, which is entering the market in Lithuania, intends to open 3 hotels; one of them will be located in Rinktines street. “Accor Hotels” and other foreign hotel chains are also looking for the opportunities to expand in the capital city. In mid-2016, a renovated hotel of Smiltynė yacht club (40 rooms) will be opened in the Curonian Spit. Meanwhile, there were no plans of opening new hotels in Kaunas in late 2015. In comparison with 2014, the rents have increased insignificantly; however, the expansion of hotels is stimulated by the increasing occupancy rates in Lithuania, which reached the limit of 50 percent in 2015.
Current issues of law

The year 2015 brought significant new legislative developments in the real estate sector. The year started with the coming into force of amendments obligating to obtain notarial certification for most of securities transactions that are also relevant in the context of RE transfers. The year saw an update to the PPP Rules, granting a right to persons to initiate partnership projects; the amendments to the Law on Investments have introduced the concept of industry parks. In addition, a review of VAT and RE taxes resulted in the introduction of reverse charging of VAT on construction operations, and amendments to the Law on Immovable Property Tax introduced a new rate of tax of 0.5 per cent chargeable on the value of real estate properties owned by individuals which is in excess of the non-taxable amount of EUR 220 000. The legal framework adopted in 2015 imposed new obligations on developers to register incomplete buildings, and the residential housing market was “frozen” due to the Responsible Lending Regulations adopted in November.

Finally, in compliance with the European Union requirements, a set of provisions was enacted, obligating construction of buildings having no lower than Class A energy efficiency ranking. Although such provisions were initially scheduled to take effect yet in January 2016, by decision of the Minister of Environment that date was postponed to November this year.

Before that, yet in spring 2016, we should see the coming into force of the Law on Credit Agreements Related to Immovable Property transposing the Housing Directive, which provides for the main conditions of granting credits intended for the acquisition of residential property.
All Lithuanian economy and real estate market report 2015-2016 (.pdf)
Next Review
Previous Review
Naujienas sužinokite pirmi!
Prenumeruoti
Lithuanian economy and RE market report 2015 Q3
2015-12-07
MORE
2016 m. I pusmečio Lietuvos ekonomikos ir NT rinkos apžvalga
2016-08-11
MORE
Changes in apartment prices in urban districts of Vilnius 2012 – 2015 (RE MARKET TRENDS)
2015-09-29
MORE
Name
Phone
E-mail*
message
Send
info@inreal.lt
+370 5 273 0000